For those of you still working on your own Colour Recovery methods (is there anybody except Andrew Steer?) there are a few frames at the beginning of the Paul Temple episode which are just a plain, uniform colour. These are ideal for testing geometry-extraction algorithms, for example. Here is what my process reckons the horizontal and vertical components of the distortion are: 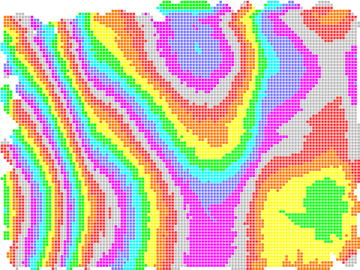 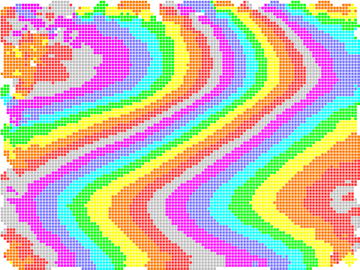 As always, each coloured contour corresponds to one HD pixel (horizontally) or one HD line (vertically). I have uploaded the source frame in the form of a BMP file for anybody who wants to use it for experimentation.

I have been reminded that the Paul Temple material has come via a print (rather than a negative) returned from an overseas broadcaster, which is one reason why the quality is so poor. It is therefore particularly satisfying that my process manages to extract some colour from it.

Six months have passed since my last update, and plenty has happened in that time. However there have been no major modifications to my process, and therefore nothing of particular note to report here. The bulk of the time has been spent developing the Colour Recovery software application to a stage where it can be run by anybody (having acquired the necessary skills), instead of the hotchpotch of individual utilities used for the early experiments.

Changes to the algorithm have been relatively small, and evolutionary rather than revolutionary. One worthwhile enhancement is that the software can now use a set of 'custom' subcarrier reference files which have been pre-distorted to compensate for the gross geometric distortions in a particular sequence. By that means the residual distortion that needs to be measured, and compensated for, is reduced and the performance thus improved, especially with 'marginal' or difficult material.

In addition to making the software more user-friendly, and 'tuning' it for best results, I have developed a couple of other programs to be used alongside the main application. One is a utility that takes the measured distortion values (from a frame carefully selected to give best results) and generates from them the 'custom' reference files mentioned above. This basically involves fitting a two-dimensional function (i.e. a surface) to the measured distortion values, to smooth out the measurements and to fill in values for areas containing little or no colour. That function is then used to 'warp' the reference files to suit.

The other ancillary utility is a 'quadrant editor'. The purpose of this is to allow the inevitable mistakes made by the main Colour Recovery process to be corrected (manually) by examining each frame and if necessary changing the quadrant in one or more regions. This is necessarily quite labour-intensive, but has proved to be very valuable in removing the most objectionable artefacts.

The main Colour Recovery application is (at the time of writing) at version 1.04b and anybody who would like a copy should contact me privately. The 'custom reference' and 'quadrant editor' utilities are not in a state which would allow me to release them, and it's currently unclear on what basis they will be developed further (I consider them to be outside the remit of this Working Group as they are not specifically associated with Colour Recovery).

Another reason for the silence here over the last few months was to reduce speculation about whether or not the process had reached a state where it could be used 'for real'. Now the cat is out of the bag, with the broadcast by the BBC of the Colour Recovered Dad's Army episode. That 25-minute programme took about one week of relatively intensive work to process, and proved to be an exceptionally suitable candidate. Unfortunately such good results have not been obtained from other material tested.

Retrieved from "https://colour-recovery.fandom.com/wiki/Full_gamut_colour_recovery_(yet_more)?oldid=4117"
Community content is available under CC-BY-SA unless otherwise noted.