In addition to the main Colour Recovery software application, a number of associated software tools have been developed. Use of those tools can considerably improve the quality of the final colour-recovered programme.

This utility displays a 2-dimensional spectrum of the source material (either a single frame or a composite spectrum of several frames). If Colour Recovery performance is worse than expected, it can be very useful in identifying the reason. The material having this spectrum initially gave very poor results: 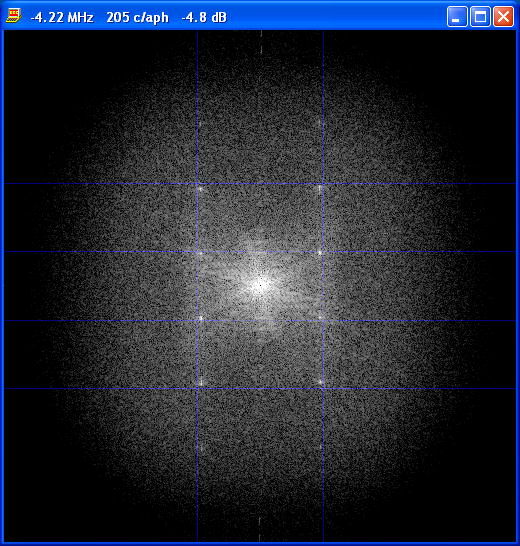 It can be seen that the bright spots corresponding to the chrominance are well separated from their correct frequencies (indicated by the intersections of the blue lines). This indicates that the source material was scanned inappropriately - in fact the frame was 'zoomed in' by about 5%. Re-scanning the material with correct settings greatly improved performance.

The spectrum can also be useful in identifying material with little or no chrominance energy at 216 c/aph (for example because of excessive 'spot wobble' in the Film Recorder). Unfortunately this problem is not so easily fixed!

The greater the difference in geometry between the source programme and the reference files, the more difficulty the Colour Recovery process has in measuring that difference, and the greater the likelihood of the process making a 'mistake' when determining the colour quadrant. For that reason the default reference files (urefdist.bin, vrefdist.bin and wrefdist.bin) are pre-distorted to better match the distortions typical of the Film Recorders used, and thus to improve performance.

However, even better results (often substantially better) can be obtained by pre-distorting the reference files to the particular geometric characteristics of the source material (for example to match the specific Film Recorder used, rather than a 'generic' one); this is the purpose of the Colour Reference generation utility. The way this works is as follows:

The end result is that the 'residual' distortion, which must still be measured by the Colour Recovery software, is now much smaller (corresponding only to film stretch/weave and inadequacies of the polynomial representation). As a result the Colour Recovery performance should be significantly improved.

The process involves the following steps:

Despite all the measures taken to optimise the performance of the Colour Recovery software application, it will inevitably occasionally make 'mistakes' (some of the reasons for this are described under Limitations of the process). These mistakes will result in the colour quadrant being incorrectly determined; so for example somebody's face may appear blue (+U, −V quadrant) rather than the correct hue (−U, +V quadrant).

The purpose of the Quadrant Editor is to allow such errors to be corrected, manually, as a post-processing operation. The utility displays each frame of the colour-recovered material, and allows regions with an incorrect quadrant to be identified, marked and put right. The software has these main features:

Here is a snapshot of the Quadrant Editor in use, where the colour of the 'red' rectangle has been deliberately changed to green (note how the polygon has been drawn around Jimmy's hair) and the quadrant has been corrected in a small region on the right: 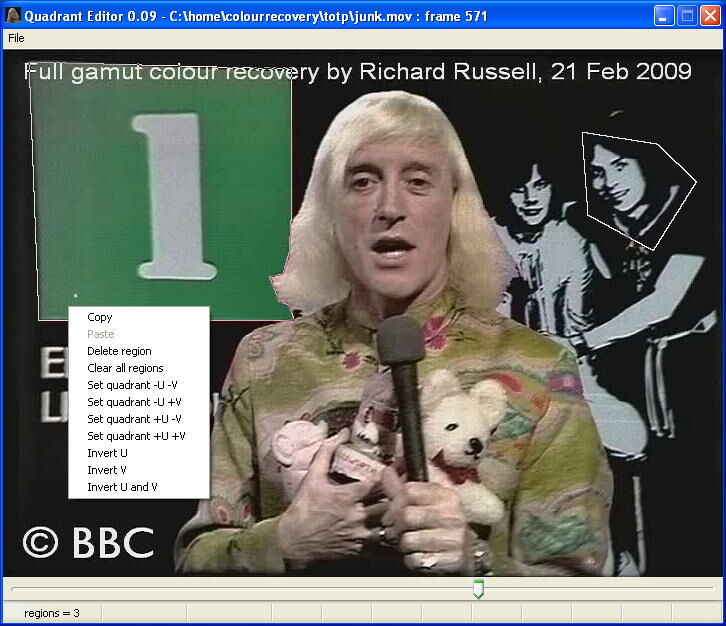